Multi-family vs Single-Family Rental Trends: Which is Right for You?

It’s no secret that the rental market across much of the United States is at historical levels, partly due to the Great Recession. Whether by necessity or choice, more people are choosing to rent than own. Tenants are also less mobile than in the past. But one story you may have missed in this larger narrative is that single family rentals are significantly higher in the last decade since the housing collapse.

How strong is the single family rental market today? Consider these stats:

Single family rentals have become so attractive that an entire industry has sprung up in the last few years to build homes to rent. These real estate investment trusts, or REITs, first acquired distressed properties at bargain prices during the early years of the financial crisis. Now many are constructing new homes for the rental market, the Las Vegas Review Journal reported. Quoting Alex Sifakis, president of JWB Real Estate Capital, a new single-family rental can command up to 8 percent more rent than an older, renovated property.

However, most single family rental operations are still small scale, according to Bloomberg, with two-thirds of properties owned by landlords letting out three or few houses.

One of the key demographics driving the rise in single family rentals is the millennial generation, an age group from 25 to about 35 years old.

Last year, more than 11 percent of adults lived at home with their parents, the highest rate since 1994, according to HomeUnion’s 2017 National Single-Family Rental Research Report. Many are Millennials saddled with huge student debt in the midst of a housing market that has recovered much of the value it lost during the financial crisis. This generation is also less prone to ownership in general, coming of age in the sharing economy.

All those factors combined mean that home ownership among this age group has fallen from nearly 44 percent to about 36 percent during the last 10 years, according to Mortgage Professional America (MPA). Delayed ownership by Millennials, in turn, has fueled single-family rentals among this age group, MPA reported.

“Millennials don’t want to buy yet. They are getting married later and are much more mobile than previous generations, so home ownership is being delayed,” John Beacham, president of B2R Finance, told MPA.

What are the best single family rental markets for Millennials? According to ATTOM Data Solutions, Detroit, Kansas City, Oklahoma City and Duluth, Minnesota are among the best cities for renting to one of the biggest generations in U.S. history. 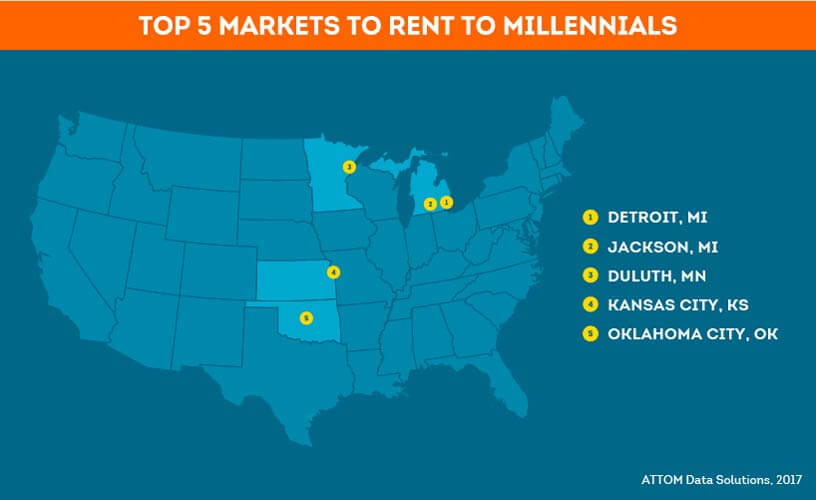 At the other end of the age spectrum, the Baby Boomer generation of renters who are 55 and older, with higher income and more in savings, are also migrating to single family rentals. A survey by Freddie Mac showed that about 12 million homeowners and renters say they plan to rent at some point. More than five million of those in the Baby Boomer generation indicated they are likely to rent by 2020.

Prospects for multi-family rentals also appear strong moving forward but not at the speed of recent years. A Multi-family 2017 Outlook report from Freddie Mac says the market will continue to command rents above historical averages, though vacancy rates are expected to go above 5 percent for the first time since 2011. Freddie Mac reports that inventory should increase through the year, which is one of the factors driving a bump in vacancies. Of course, vacancies will vary widely depending on the local market. Cities like Boston, Los Angeles, New York City and San Francisco will likely always be considered “fully occupied” by industry standards.

Meanwhile, some of the smaller markets, such as Colorado Springs, Phoenix and Tampa, will likely see strong rent growth in 2017, according to Freddie Mac. Demand should continue to outstrip supply, “allowing landlords to raise rents at a quick pace.”

More recent economic indicators suggest that supply is finally catching up with demand nationwide, as rental increases showed signs of deceleration in the first quarter of 2017. The average U.S. apartment rent grew 0.4 percent and by 3.3 percent on a year-over-year basis, according to a story in Multifamily Executive. A year ago, year-over-year growth was more than 5 percent.

In the same report, the national vacancy rate rose a tenth of a percent, from 4.2 percent to 4.3 percent. New construction added 39,000 units in the first quarter, which is the lowest total in a couple of years. However, occupancy growth was about 24,000 units, the lowest net absorption since 2010.

Both types of residential markets have their pros and cons, depending on your goals as a landlord.

Single-family rentals certainly offer more variety in terms of inventory, with about five million units for sale at any given time. They are also more “liquid” in terms of resale turnaround than a multi-family complex, according to the website BiggerPockets. Finally, they are cheaper to buy on average.

A multi-family investment can offer a greater and more manageable scale than single-family rentals. In other words, many landlords find it simpler to buy a 10-unit apartment building over 10 single-family homes. The same BiggerPockets article notes that there are multiple ways to get a return on investment from a multi-family complex:

“Apartment buildings typically have a lower cost per door, management is typically more effective and profitable, and any improvements made can help to lift the value of many units, not just one. For example, if you put in a pool, you are adding the value of a swimming pool to every unit in the community.”

In the end, diversification of your portfolio as a landlord, as in most areas of financial  investment and life in general, can add balance and variety to your business.

The single family rental market remains strong by historic standards, with home ownership at its lowest level since 1965. Predictions that both Millennials and Baby Boomers have strong interest in single family rentals could mean millions of people will be entering the market in the next few years. While there are indications that the housing market itself may be cooling off or peaking, that could lead to better bargains in the near future. Regardless, landlords looking to invest still have access to low interest rates.

Whatever your approach, one strategy should stay the same: Ensure you find the best tenants for your rental. TransUnion SmartMove can help with its comprehensive screening process which offers tenant credit reports, criminal background and eviction records.